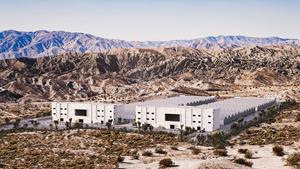 COACHELLA VALLEY, Calif., April 11, 2022 (GLOBE NEWSWIRE) — Today Green Horizons announced plans for its massive, trailblazing Canna-Campus in Coachella Valley, which broke ground late last year and is under construction. The first-of-its-kind facility will feature scaled cannabis cultivation alongside CPG brand development, positioning the Company to become one of the largest vertically integrated brand platforms in the world. Green Horizons will also offer campus tours, education and workshops to outside visitors.

Green Horizons is launching the first 226,787 sq. ft. of its campus with options to scale to 1,000,000 sq. ft. as market conditions dictate. Phase I of the Green Horizons campus will consist of 101,787 sq. ft. of a state-of-the-art, sealed, Class “A” automated light deprivation greenhouse. Phase II adds an additional 125,000 sq. ft. that will serve as the Company’s corporate headquarters as well as its brand incubator, along with additional light deprivation greenhouse cultivation space.

Green Horizons’ mission is to fuel a portfolio of in-house brands with in-house supply to guarantee consistency and uniformity. Combining the management team’s track record of cultivation excellence with the Company’s high-tech sun powered cultivation facilities, Green Horizons aims to redefine the cultivation landscape to create a blue ocean of top shelf flower at greenhouse COGS. In leveraging its low-cost basis, Green Horizons will be able to continue scaling as commoditization exerts downward pressure on higher cost producers.

The Company will be formally announcing their much-anticipated debut brand, a crossover from the fashion world, which will launch in Q3 of 2022, to be followed by a value brand paying homage to the Coachella Valley, anticipated in summer 2023. Upon completion of the facility, the brands will be exclusively powered by proprietary genetics bred in-house by the Company, a cornerstone differentiator for all Green Horizons portfolio brands.

“The Coachella Valley is the perfect place to build a world class cultivation and CPG brand campus at this scale,” said Carlos “Los” Arias, Chief Executive Officer of Green Horizons. “Coachella has long been a stalwart agricultural community, and I am honored to now help make Coachella a global cannabis destination. Being built to last is more important than being first, and we’re just getting started.”

Green Horizons was co-founded by Arias and Michael C. Meade. Arias leads the Company’s vision to create culturally relevant brands that bring people together. Known for his high vibrational presence, Arias is an exemplar of community-minded collaboration that serves as the bedrock of the Company’s culture. Meade serves as Green Horizons’ President and largest investor. Through an unrelated entity, Meade is developing Coachella Cann Park, which is being leased to Green Horizons. Meade’s development company has secured an $18.5M construction loan from Innovative Industrial Properties to fund construction of the property.

Arias and Meade are joined by founding investor Star Branding Investment Group, LLC, which brings its global entrepreneurial prowess to Green Horizons, drawing on its success in building global brands and experience in a wide range of operational matters. Brought together, Green Horizons and its principals have the requisite capabilities in-house to scale a profitable cultivation and CPG enterprise, synchronizing facility operations expertise and global brand prowess.

Green Horizons recognizes the privilege to work within the legal cannabis space and is committed to positive social change at the local level.

Education is a pillar of the Company. With a mission to destigmatize cannabis through education and transparency, Green Horizons will open its doors to offer campus tours to outside visitors, along with workshops and educational programs for the community and those interested in learning more about the cannabis plant and the industry.

The Company is partnering with the City of Coachella in launching the Build the Valley Initiative, which will consist of two prominent initiatives: first, building infrastructure for the community; and second, advocacy for expungement and job creation for which Green Horizons will create a dedicated Coachella Valley program. In addition to their local community activism, Green Horizons is also invested in the sustainable future of the cannabis industry and is a member of an industry task force, comprised of top operators, financiers and attorneys, whose aim is to eradicate the use of plastics in the cannabis supply chain.

Green Horizons is a next gen, vertically integrated cannabis company that builds CPG brands. With world class facilities to fuel globally relevant brands, the Company’s aim is to crossover and create meaningful brands that bring people together. www.greenhorizons.io

Arias is regarded industry wide as a plant medicine expert, honed from his Cuban/Brazilian lineage and years of dedication to studying and working with medicinal plants all over the world. A lawyer by training, Arias is responsible for the Company’s key strategic partnerships.

In addition to securing the first issued cannabis licenses in Riverside County 15 years ago for cultivation and retail, Meade went on to build a cannabis real estate empire in the desert valley, fueled by Wilson Meade commercial brokerage and Desert Rock Development.

Star Branding Investment Group, LLC is a private investment vehicle founded by Mr. Tommy Hilfiger and Mr. Joe Lamastra, through which it, and its subsidiaries seek investments in businesses across a broad range of industries.