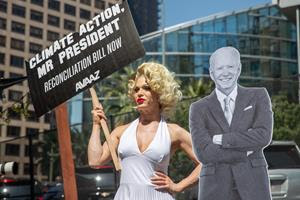 A drag queen dressed as Marilyn Monroe calls on US President Joe Biden to be a climate leader while singing “Happy Summit Dear President!” during an Avaaz protest at the Summit of the Americas on Thursday, June 9, 2022 in Los Angeles. (Jeff Lewis/AP Images for AVAAZ)

*** Dressed as iconic Marilyn Monroes, drag-queens disrupted the Summit of the Americas in LA, demanding urgent funds for Latin America and Caribbean nations to tackle the climate and biodiversity crises ***

LOS ANGELES, June 09, 2022 (GLOBE NEWSWIRE) — During Pride month, a group of drag-queens welcomed the arrival of many of the most prominent heads of state at the Summit of the Americas, calling on presidents from the US to Canada to Argentina to become environmental leaders the world could be proud of. The queens paid particular attention to President Joe Biden and Prime Minister Justin Trudeau whose countries are behind in paying financial assistance to other nations in the hemisphere to tackle the climate crisis, land degradation and biodiversity loss.

Los Angeles drag-queens Aurora Sexton, Mischa Kinx, Marilyn, Vivienne Vida, Pixie Dot and Hope showed up to the Summit of the Americas dressed as Marilyn Monroe alongside Kalista Stage dressed as Evita. The event, organized by the 70-million member global rights group Avaaz, aimed to draw attention to the extreme impacts the ecological crisis is having across the Americas including tragic migration waves, increased food insecurity, and a mounting financial crisis.

Mischa Kinx, Los Angeles-based drag-queen, said: “We are literally lip syncing for our lives! The earth, the one and only mother, is all we have. If world leaders don’t listen today, we’ll just find higher heels so they can’t ignore us tomorrow. It’s time to act on climate change and show us you know what pride means!”

Oscar Soria, Avaaz Campaign Director, said: “This Summit of the Americas can’t be another summit of nice words and empty promises. President Biden, the host of the summit, must offer an ambitious regional cooperation package, including debt relief, so countries in Latin America and the Caribbean can use these resources to protect the environment and their people. If he does not, the United States will face a climate crisis and a migrant crisis it is woefully unprepared to handle.”

Twelve years after the Obama-Biden administration’s $100 billion pledge to support low income countries experiencing disproportionate impacts from the climate crisis, the US is still falling *tens of billions* short of delivering on its promise. This week’s Summit is another opportunity for Biden to restore America’s image in the Americas, committing to pay $32-49 billion per year in climate funding.

For professional images free of editorial use, and to set up interviews: email media@avaaz.org

Notes to the editor:

Here’s the message for each head of State:

United States: Addressing US President Joe Biden, Marilyn Monroe reminded President Biden that he needs to pay the money promised to address climate change, and ensure ambition is met at the summit by “saving nature before it’s gone.”

Canada: The Marilyn serenading Canadian Prime Minister Justin Trudeau also pressured him to pay the money pledged to halt climate change, and further called on him to end his government’s investments in fossil fuels.

Argentina: President Fernández was urged “not to kneel to the IMF”, and to work for a debt for nature solution. The Argentinian leader was also greeted by his country’s most iconic idol, a drag-queen Evita Peron, who asked him to call upon the rich countries to pay their ecological debt to developing nations. Argentina holds high amounts of sovereign debt, while its territory encompasses important ecosystems that help to regulate the climate in the world.

Ecuador: President Lasso was urged to stop annihilating the Amazon by drilling for oil, primarily to feed demand from California.

Brazil: Brazil’s Bolsonaro faced a Marilyn furious about the destruction of the Amazon and his contempt for the rights of Indigenous peoples.