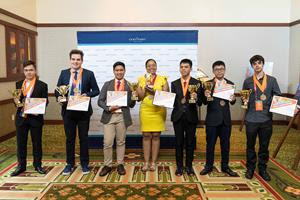 SALT LAKE CITY, July 27, 2022 (GLOBE NEWSWIRE) — The winners of the 2022 Microsoft Office Specialist (MOS) and the Adobe Certified Professional World Championship have been announced by Certiport, the leading provider of performance-based IT certification exams that accelerate academic and career opportunities for learners.

In its 20th year, the Microsoft Office Specialist competition attracted more than one million contestants from around the world. Students, ages 13 to 22, competed with peers to prove their superior skills in Microsoft Word, Excel, and PowerPoint, culminating in the most popular technology skills competition on Microsoft Office—and the only one endorsed by Microsoft since its inception in 2002.

To enter the competition, students took a qualifying Microsoft Office Specialist certification exam to demonstrate their mastery of Microsoft Office technology. Regional competitions were held worldwide, and 95 finalists qualified to compete in the final round of competition held in Anaheim, CA from July 24-27.

In the concluding round, competitors participated in a two-part skills demonstration. The first skills demonstration was a 30-minute timed exam. The second part is an advanced three-hour research project, in which students research their given topic, formulate an opinion, and represent their conclusions and research in an asset appropriate to the competition application (Word report, Excel workbook, or PowerPoint presentation). This is the second year where finalists were required to complete a free-form project.

At the final event in Anaheim, Certiport and Microsoft recognized the top student competitors in the MOS World Championship Awards Ceremony and presented each First place winner with a $7,000 cash prize, Second place with $3,500 and Third place with $1,500.

“The pandemic put our live MOS Championship events on hold. We are so thrilled to be able to return to in-person competitions,” said Ray Murray, Vice President and General Manager, Certiport. “It is inspiring to see students from 21 countries come together to ‘speak Microsoft’. The winners receive extra praise, but every single student who entered has earned a valuable workforce credential that will help them find success in college and in their career. The last two years have highlighted the importance of IT skills for tomorrow’s professionals and it’s incredible to see so many young people get introduced to IT certifications through the MOS World Championship.”

Microsoft Office Specialist is the only official Microsoft-recognized certification for Microsoft Office globally and serves as a powerful instrument for assessing students’ skills and preparing them for real-world application of their knowledge.

“The Microsoft Office Specialist World Championship is one of our favorite events annually, because these students are thrilled to compete and they inspire all of us with their competitive spirit and crowning achievement,” said Rick Herrmann, Vice President Worldwide Public Sector, Education, Microsoft. “These students work diligently to earn valuable industry-recognized certifications, and we know that the future is bright with upcoming business and technology leaders like those we met at the MOS World Championship.”

In its 9th year, the Adobe Certified Professional competition attracted more than 238,000 contestants from around the world to prove their superior digital communications skills using Adobe Photoshop, Illustrator, and InDesign. Salma Sanchez from the United States won the top prize out of 22 finalists who came together for the final round of the global competition from July 24-27.

The 2022 Adobe Certified Professional World Champions are as follows:

“All of the entries demonstrated a clear aptitude for design, and an incredible artistic flair,” said Richard Vevers, Founder and CEO of The Ocean Agency. “We were really impressed by the professional-level work these students accomplished in just eight hours – which proves they can follow client instructions and use both their innate design abilities and the Adobe skills they’ve learned in school to create something amazing and industry-ready.”

A panel of judges including The Ocean Agency and design industry experts reviewed the final projects and determined the winners based on visual appeal, their ability to meet the client’s requirements and brand aesthetics, as well as their professional use of Adobe Creative Cloud applications. The First-place winner received $7,000, Second $3,500, and Third $1,500.

“If there’s one thing that the pandemic has shown us, it’s that creativity is needed now more than ever. These creative students have demonstrated an astounding level of talent in the Adobe Championship,” said Ray Murray, Vice President and General Manager, Certiport. “Seeing what these finalists are able to create in just eight hours, it’s apparent that they have a deep understanding of digital design concepts and can leverage their Adobe skills to in a real-world work scenario.”

“We enjoy participating in the Adobe Certified Professional World Championship every year, not only to see the wonderful projects created, but also to connect with ambitious, creative students who are launching their careers with industry-recognized certifications,” said Tacy Trowbridge, Global Education Programs Lead at Adobe. “Seeing what the competitors produced for The Ocean Agency gives us just a taste of their talent. Over the years we’ve watched many of these finalists go on to jobs and internships in creative fields, proving the value of design and technical skills that they learned in the classroom.”

Next year, Certiport will host the 2023 Microsoft Office Specialist and the Adobe Certified Professional World Championship at Orlando, Florida, from July 30-August 2, 2023.

You can learn more about the MOS World Championship here.

“Certiport” is a registered trademark of NCS Pearson, Inc. in the United States and other countries. The names of actual companies and products mentioned herein may be the trademarks of their respective owners.

Greg Forbes (based in UK) greg.forbes@pearson.com

A photo accompanying this announcement is available at https://www.globenewswire.com/NewsRoom/AttachmentNg/020b9c49-e73b-416d-a9e8-a4098129f6d6