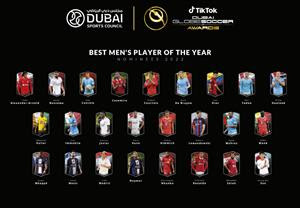 DUBAI, United Arab Emirates, Oct. 20, 2022 (GLOBE NEWSWIRE) — The shortlist of top international football players and professionals has been announced by the Dubai Sports Council and Dubai Globe Soccer Awards. Football fans across the world can now vote for their favourites in the first round of public voting to decide the winners of the 13th edition of the Dubai Globe Soccer Awards.

A photo accompanying this announcement is available at https://www.globenewswire.com/NewsRoom/AttachmentNg/236c2e53-f125-47af-b76d-5f4b01c3e5f9