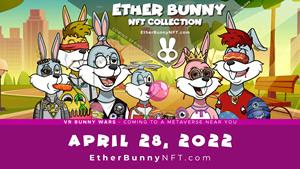 The Water Rabbit will be a special, limited-edition Ether Bunny NFT character emblazoned with the Chinese Year of the Rabbit symbol and contain special traits for “Luck and Prosperity”. These special traits will also be revealed in the game BUNNY WARS and VR BUNNY WARS.

These special little rabbits will draw from Chinese folklore that centers around how the Chinese zodiac order was originally decided, a race between the creatures of Earth. According to legend, the Jade emperor organized the competition, declaring that the first 12 creatures to cross the finish line would be rewarded by having a year in the zodiac named after them. With a little luck, the rabbit came in fourth.

“Our Asian community on Discord and Twitter has grown significantly in recent months,” said MetaBloxx CEO and Creative Director Keith Chester. “We are very aware of the importance of symbolism and the role that it plays in cultures abroad. The 2023 Chinese New Year is the Year of the Rabbit. More specifically, 2023 is the Year of the Water Rabbit. So, we have designed 100 unique Ether Bunny NFTs with the Chinese symbol of the rabbit and empowered it with great luck and prosperity in the form of hidden traits and rarities. Some of these include a magic amulet with the ancient rabbit symbol, the lucky colors of blue and purple swirling like water in the background, and blue fur, which none of the other Ether Bunny NFTs have. Whomever gets one of these Water Rabbits will be very lucky indeed.”

Ether Bunny NFTs are a collection of 10,000 computer-generated rabbits on the Ethereum Blockchain with various traits and rarities that will be revealed during the Play2Earn game “Bunny Wars” and in the 3D game “VR Bunny Wars”. Two bunny tribes will be battling it out with the objective of raising money for wildlife charities around the world. A portion of all proceeds from Ether Bunny NFT sales, merchandise and “in-game” revenues are donated to charities that are vetted and chosen to be part of the Ether Bunny wildlife conservation platform. 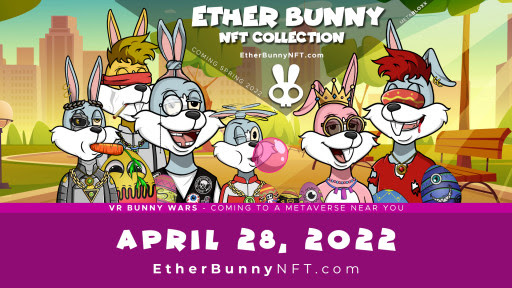