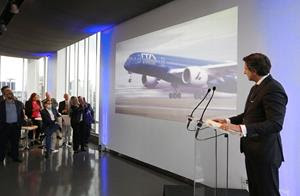 Pierfrancesco Carino, V.P. ITA Airways International Sales, is pictured during a presentation in New York celebrating the launch of the company’s summer season with 6 daily flights between Italy and the U.S.A., including New York, Miami, Boston and Los Angeles, on Wednesday, April 27, 2022. ITA Airways is the new Italian national carrier which started its operations in October 2021 and is now offering flights during the summer months to 64 destinations, of which 7 are intercontinental, 23 national and 34 international. (Stuart Ramson/AP Images for ITA Airways)

A Total of 42 Weekly Flights by the End of August

NEW YORK, April 28, 2022 (GLOBE NEWSWIRE) — Yesterday, at the Glasshouse Chelsea in New York, ITA Airways, the new Italian national carrier presented to representatives of the American and International press as well as business partners in the US market the new connections with the American hubs launched with the 2022 summer season. The Company aims at offering six daily flights between the United States and Italy by June, to meet the travel needs of tourists and business passengers.

With flight operation available since October 15, 2021, ITA Airways is an efficient and innovative air carrier that will be a reference point in providing Italy with quality connectivity with domestic, international, and intercontinental destinations, thus boosting tourism and foreign trade. This will result courtesy of a strategy that focuses on the best customer service, combined with digitalization and sustainability, declined in its environmental, social and governance aspects.

The development of the intercontinental network represents one of the main assets of the Company, a strategy that will be consolidated also thanks to the arrival at the end of May of the new, latest generation Airbus A350 aircraft, which will join the Airbus A330 already operating in the fleet since the start of the summer season on long-haul destinations.

In particular, the focus of the expansion of ITA Airways’ routes for this summer is the US market, which is the most strategic market after Italy, as well as the one with the highest number of Italian Americans. In fact, by the beginning of June, ITA Airways’ program for the US market will be completed: in addition to the routes to New York, Miami and Boston – already operational with direct flights from Rome and Milan Malpensa (New York only) – the program includes the opening of Los Angeles, from June 1, with a direct flight from Rome Fiumicino.

In addition to these five connections already operating to North America, a new destination from Rome Fiumicino to Los Angeles will be added in June, bringing the offer from Italy to the United States to a total of six daily flights.

The launch of the new routes consolidates the process of expansion in the US market, which aims to reach a total of 42 weekly flights between the United States and Italy by August. Moreover, through the code share agreement signed last year with Delta, there are more than 100 domestic destinations that ITA Airways customers can access through the hubs in the domestic network of the American company, with 40 destinations served through New York JFK and an array of equally important connections from Boston, Miami, and Los Angeles offered to meet the needs of business and leisure customers.

Moreover, the multiple offers of the Rome Fiumicino hub will allow ITA Airways to be the reference carrier from the United States to Italy and via Rome to Europe and the Mediterranean for the Italian community and the main communities of the Mediterranean countries.

In fact, the 2022 ITA Airways summer season will also feature the most popular Mediterranean destinations with new flights to the islands of Italy, including Sardinia served from both Rome Fiumicino and Milan Linate, as well as Spain, Greece and Croatia, and seasonal flights in August from Rome FCO and Milan Linate to Lampedusa, Pantelleria, Corfu, Heraklion, Rhodes, Ibiza, Menorca, and Majorca. Also, in August the destinations of Kefalonia, Dubrovnik and Split will be served from Rome FCO and Thessaloniki from Milan Linate.

The summer season will also see the addition of new flights from Rome Fiumicino to Buenos Aires and São Paulo starting from early June. These new routes will enable ITA Airways to expand into South America, which has always been a preferred destination for Italian holidaymakers and a country with the largest populations of Italian origin, as well as very important destinations alongside the United States for business and freight traffic.

The centrality of the US market in ITA Airways’ strategy is also reflected in the important marketing campaigns launched in recent months in New York, Boston, and Miami, with billboards in the landmarks of American tourism, including Time Square.

The U.S. market is also of primary importance for ITA Airways’ Cargo development strategy, given the importance of import and export traffic flows between Italy and the United States and the demand for related transport services by manufacturing companies, with reference to Made in Italy manufacturing and the transport of pharmaceutical products. The expansion of the number of flights and the portfolio of U.S. destinations, therefore, enriches the ITA Airways cargo offer, with direct and connecting transport solutions to and from the main cities in the United States and Europe, which will be further strengthened with the progressive use of the latest generation Airbus A330 and A350 aircraft, featuring greater load capacity and lower CO2 emissions.

The local presence is also ensured by the ITA Airways domestic team that works with travel agencies, trade partners, and web to ensure coverage of the main customer segments including business, leisure and VFR traffic. ITA Airways’ Cargo team in the United States works with major freight forwarders and in partnership with leading GSSAs, providing customers with all services for the organization and management of shipments.

Finally, thanks to the strong commercial partnership established with the major trade partners and corporates, ITA Airways ensures the full distribution of its flights covering each passenger segment in the United States.

Launched in early March, ITA Airways’ 2022 summer season includes 64 new destinations, of which 23 are domestic, 34 are international and 7 are intercontinental. Thanks to code share agreements with the major international carriers, ITA Airways is continuing to grow its network via partnerships with other global carriers – giving a privileged access route to the markets of greatest interest for the Company, firstly and foremostly in Europe and America, but also in Africa and Saudi Arabia.

Codeshare agreements enable ITA Airways to reach the entire domestic network of other international carriers with direct flights from Rome Fiumicino and Milan Linate to their hubs. In all, 24 codeshare agreements have been signed so far, for a total of over 270 destinations served on which ITA Airways will use its own codes.

All ITA Airways flights can be purchased on the ita-airways.com website, from the ITA Airways Call Center, or from travel agencies and airport ticket offices.

Volare Programme
With a commitment to maximum customer focus, ITA Airways launched on October 15, 2021 “Volare”, its new loyalty program, which is also accessible to American customers. It has been designed as an open ecosystem of services and products, made available by ITA Airways and its partners to ensure that customers have a unique, 360 ° travel experience of maximum value. Since March, the program has been enriched with new features that increase its flexibility and ease of use and offer frequent flyers everything they could desire from a program dedicated to them.

Volare is widening its strength based on the four values on which it was developed: ‘Freedom’, ‘Personalization’, ‘Choice’, and ‘Connection’:

Volare is a ‘made to measure’ program that consists of four exclusive Clubs, on an upward scale of increasing levels of premiumness and dedicated priority services: these are Smart, Plus, Premium and Executive. With every purchase on ITA flights, customers can accumulate the points they need to upgrade to the higher Club level and take advantage of various benefits and premium services. Furthermore, beginning from Club Smart, as the access threshold increases, the advantage for the customer also increases in terms of multipliers and the services available.

There are already many subscribers to Volare, both from Italy and abroad. To date, the program has more than 361,500 members, of which over 40,000 are Elite members (i.e. Club Plus, Premium and Executive). This result is also important because it is consolidated on the international market: suffice to say that 35% of the participants in the Status Match campaign came from foreign companies.

A photo accompanying this announcement is available at https://www.globenewswire.com/NewsRoom/AttachmentNg/63b5e0e5-c979-4d7c-bebd-e492203668bc