ROME, Dec. 02, 2021 (GLOBE NEWSWIRE) — The agreement reached today between ITA Airways and the trade unions is the result of a negotiation between the parties, carried out in compliance with their respective positions and with a collaborative spirit with the aim of protecting the Company’s workers and ensuring consistency with the objectives of the Strategic Plan of the Company itself.

The company has appreciated the openness of the trade unions that have recognized the peculiarities of the Company, linked to its nature as a start-up, to achieve and maintain over time a structural competitiveness of costs that makes it functional within the strategic design of a long-term partnership.

With the return of ITA Airways among its members, following the change in the leadership of the association with the entry of representatives appointed by ITA Airways, Assaereo has signed today the renewal of the specific part of the carriers of the National Air Transport Agreement, defining specific rules in supporting start-up activities and a new salary regime that can facilitate its diffusion in the sector, contributing to the improvement of competitiveness for all companies in the air transport sector itself.
Downstream of this agreement, ITA Airways and the trade unions signed the supplementary company agreement. 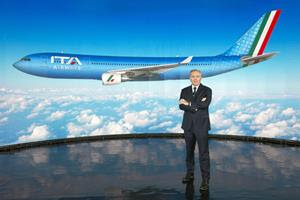 Overall, this agreement supports the strategic path of the Company which provides for employment growth as early as 2022, in line with the macro-economic and specific trend of world air transport, and development opportunities for flight crew. In fact, in the next few weeks, new courses for the training of Commanders will be launched to be used also on the new generation machines that ITA Airways will receive in the coming months from Airbus, as announced yesterday. It should be noted that the latest Command Training Courses date back to over 10 years ago, an important concrete sign that demonstrates the Company’s attention to flight personnel and their training, in order to fill roles of increasing responsibility. A minimum of 130 courses is expected in 2022.

Particular attention has been paid to corporate welfare and precisely this last element represents a big novelty of the new contract. In fact, for the first time, Health Assistance will also be recognized for all ground employees, while for the flight crew there will be an increase of the premium compared to current conditions. This is a proposal carried out by the Company confirming the attention to “people” who represent the pillar of the business plan.

Furthermore, within this new Industrial Relations Protocol, a Result Bonus is introduced for all ITA Airways employees, which will be calculated by combining the Company’s economic profitability and customer satisfaction, measured using the NPS certified system (Net Promoter Score). This variable component will represent 15% of the salary level and will be articulated on a six-monthly basis. The conditions for 2022 remain unchanged, while, in line with what was already foreseen by other airlines that had reduced wages due to the pandemic, from 2023 there will be a progressive realignment of the wage elements, starting from a 3% increase for pilots and 1% for flight attendants.

“After 5 years that the National Labor Agreement was not renewed – has declared Alfredo Altavilla, Executive President of ITA Airways – we have achieved an important goal that we are sure will ensure competitiveness for all Italian air transport companies. There are two elements to underline: the introduction of a Result Bonus, present for the first time in such a significant measure on remuneration and above all linked to customer satisfaction, and the confirmation of the profitability objectives of the business plan, which foresee the achievement of operational breakeven in the second quarter of 2023.”