Modelo, The Official Beer Sponsor of the College Football Playoff, is recognizing the full-time commitment and Fighting Spirit it takes to be a college football fan 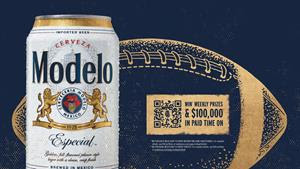 CHICAGO, Aug. 25, 2022 (GLOBE NEWSWIRE) — Modelo®, The Official Beer Sponsor of the College Football Playoff, is championing the Fighting Spirit of fans across the nation. Modelo knows that being a dedicated college football fan is not an easy job – it comes with late nights, early mornings and long weekends. For that reason, Modelo is celebrating college football fans by giving them the chance to prove their full-time fandom and win a $100,000 “salary” prize plus a trip to the College Football Playoff National Championship in Los Angeles in January 2023 in the Modelo Full-Time Fan Contest. One Contest First Prize winner will also win a trip to the national championship game, and Modelo is offering instant game day prizes to fans all season long in the Modelo Full-Time Fan Instant Win Game/Sweepstakes.

Modelo is partnering with college football legend and ESPN analyst Desmond Howard again this season to determine which fan has the most Fighting Spirit. At the CFP National Championship, Howard will award the winning fan their “salary” prize and a college football experience only Modelo can provide.

“After celebrating the 30th anniversary of my iconic punt return with Modelo last year, I am thrilled to continue our partnership by helping Modelo reward college football fans,” said Howard. “I turned my love for college football into a career, and now Modelo and I are rewarding that community by giving one passionate fan who loves the game as much as I do a six-figure “salary” prize and an unforgettable experience in Los Angeles at the College Football Playoff National Championship.”

To win the “salary” prize, college football fans must prove to Modelo and Desmond Howard why they should be the Grand Prize “Full-Time Fan” winner through a photo and 200-word (or fewer) essay submission. Fans can go to the contest website at modelousa.com/pages/collegefootball and can also go to the website by scanning QR codes found at bars and in-store nationally now through November 6 to enter. Modelo and Howard will judge the submissions based on originality and creativity, overall enthusiasm and appropriateness to theme of showing their “Ultimate Fandom” in order to select the best fan for the “job.”

“Modelo is ready to take its role as the Official Beer of the College Football Playoff to the next level by celebrating the Fighting Spirit that goes into being a college football fan each and every day,” said Greg Gallagher, Vice President of Brand Marketing, Modelo. “We’re excited to see how fans stick with their team through thick and thin and reward that passion with well-deserved compensation with help from our teammate Desmond Howard.”

In 2021, Modelo worked with Disney Advertising and the CFP to enter a multi-year partnership as the Official Beer Sponsor of the College Football Playoff. To kick off the partnership, Modelo created the Unlockzie, a beer can holder with image recognition technology, that gave fans the chance to unlock exclusive prizes throughout the college football season. During the College Football Playoff, the beer brewed for those with the Fighting Spirit also celebrated game-changing plays by teaming up with Howard to reward fans with the chance to win free beer (awarded in the form of a gift card) for the entire 2022 season.

There is no better way to enjoy college football than with Modelo Especial. Whether your favorite team wins or loses, Modelo champions the Fighting Spirit of fans who keep coming back week after week with unwavering support and dedication.

NO PURCHASE NECESSARY to enter the Modelo Full-Time Fan Contest. Open only to legal residents of the 50 U.S. and D.C., 21 or older. Contest is void where prohibited. Starts 10:00 AM ET on 8/16/22 and ends 11:59 PM ET on 11/6/22. No alcohol awarded with prizes. For complete details, see Official Rules at modelousa.com/pages/collegefootball.

About Modelo®
Born in 1925 in the small town of Tacuba, Mexico, Modelo has been bringing distinctive high-quality beer to people ever since, including Modelo Especial®, Modelo Negra®, and a flavorful lineup of Modelo Cheladas. Modelo Especial is a golden, full-flavored Pilsner-style Lager with a clean, crisp finish. As the #1 imported beer in the U.S., Modelo Especial recently surpassed 150MM cases sold in 2021. The Modelo family of beers are exclusively brewed, imported and marketed for the U.S. by Constellation Brands.

A photo accompanying this announcement is available at https://www.globenewswire.com/NewsRoom/AttachmentNg/29506784-5e15-401e-b9c7-fb0f3dad7588