Lanterns of Conscience Illuminating a Brighter Path to Religious Freedom 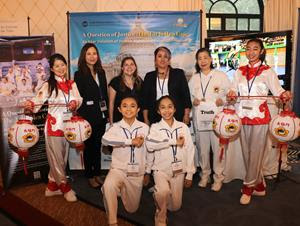 Members of Tai Ji Men display traditional Tai Ji Men lanterns, which symbolize that conscience lights up people’s hearts and guides them to make the right decision, respect and tolerate one another, and create a world of love and peace where conscience prevails.

Despite 24 years of ongoing violations of their human rights and religious freedom, Tai Ji Men continues to Promote Love, Peace, and Conscience Around the World

WASHINGTON, July 15, 2021 (GLOBE NEWSWIRE) — The International Religious Freedom (IRF) Summit 2021 held at the Omni Shoreham Hotel in Washington D.C. on July 13–15 is the largest and most important religious freedom event of the year, with over 1,000 people participating, including House Speaker Nancy Pelosi, former Secretary of State Mike Pompeo, former Congressman Frank Wolf, USCIRF Commissioner Nury Turkel, and other advocates to raise awareness of religious liberty in all corners of the world.

In addition to plenary and breakout sessions, there is an exhibition hall where representatives of every major religion and many organizations have set up booths to showcase their missions to attendees seeking to learn more. Hundreds of people came by the exhibition hall, drawn in by the colorful costumes of the Action Alliance to Redress 1219 booth to learn about Tai Ji Men, which has self-funded trips to 101 nations to promote love, peace, and conscience under the guidance of its leader Dr. Hong, Tao-Tze. At the booth today, members of Tai Ji Men displayed traditional Tai Ji Men lanterns, which symbolize brightness and pointing people in the right direction. The lanterns also symbolize conscience, which guides people to make the right decision, respect and tolerate one another, and apply their conscience to create a world of love and peace where human rights prevail.

Tai Ji Men is an organization rooted in esoteric Taoism and has 15 chapters in the United States and Taiwan. It has tens of thousands of members from all around the world, who benefit from practicing Tai Ji Men Qigong. Since it was formally chartered in 1966, the nature of Tai Ji Men Qigong Academy has remained unchanged. The deeper history of the organization that emphasizes wisdom and martial arts has been passed down from Shifu (master) to his dizi (disciples) from generation to generation. The organization has been dedicated to promoting a culture of love and peace, as well as improving global citizens’ physical, mental, and spiritual health.

In 2001, during the 54th Annual DPI/NGO Conference, the 9/11 attacks occurred, the deadliest attacks on US soil. After that, many people were anxious to leave New York. Dr. Hong and his dizi (disciples), who had gone to New York for the Conference, chose to stay there to host the “Ceremony of Ringing the Bell of World Peace and Love” to calm people’s hearts and pray for the United States and the world, with UN ambassadors, leaders of NGOs from various countries, and many peace promoters in attendance.

Tai Ji Men’s chapters in California have been actively involved in their respective communities for over two decades and have been highly praised by visionaries in various fields.

At the invitation of Senator Jesse Helms, the then Chairman of the U.S. Senate Committee on Foreign Relations, Tai Ji Men organized a cultural program on Capitol Hill in 2000. Mayor Anthony A. Williams of the District of Columbia proclaimed March 22, 2000 as the Tai Ji Men Qigong Academy Day in Washington, D.C. and praised Tai Ji Men as International Ambassadors of Goodwill and Peace.

Tragically, despite praise from presidents of Taiwan and international acclaim, Tai Ji Men has been persecuted in Taiwan, with its leader’s and members’ human rights and religious freedom being violated for over 24 years! In 1996, the Taiwanese government conducted a political purge targeting religious organizations. A prosecutor named Hou Kuan-jen falsely accused Tai Ji Men and Dr. Hong of fraud, tax evasion, and raising goblins, with fake witnesses and fabricated evidence. It took Tai Ji Men more than a decade to be found innocent of tax evasion and all other charges by the criminal division of the Supreme Court in 2007, confirming that Tai Ji Men did not owe any tax. However, the case did not end there. Taiwan’s National Taxation Bureau ignored the Supreme Court’s final decision and continued to issue unjustified tax bills to Tai Ji Men, resulting in the unlawful seizure and confiscation of its sacred land for self-cultivation last year, generating massive peaceful protests on the streets and drawing the attention and igniting discussions from international scholars and experts in the areas of human rights, religion, and law.

Tai Ji Men members from across the United States actively participated in the 2021 International Religious Freedom (IRF) Summit, speaking out to the world and urging the Taiwanese government to resolve this case of injustice as soon as possible, return to Tai Ji Men its sacred land for self-cultivation, and protect people’s freedom of religion or belief, which is a fundamental right.

Over the past 24 years, under the leadership of Dr. Hong, Tao-Tze, worldwide members of Tai Ji Men have never given up hope and have insisted on doing the right thing, even though they have been persecuted for 24 years. During this time, they have visited 101 nations to promote love, peace, and conscience through cultural exchange. Tai Ji Men’s shifu (master) and dizi (disciples) hope to use their own experience to encourage others suffering similar plights to continue seeking justice and working together for a world where people follow their conscience and enjoy human rights, religious freedom, and equality.

About Action Alliance to Redress 1219: Action Alliance to Redress 1219 is a group of international and Taiwanese legal, religious, and human rights specialists working to restore the truth about the ongoing persecution of Tai Ji Men in Taiwan by a small group of bureaucrats that has lasted for 24 years, as well as their misuse of authority and violations of the law. In addition to rectifying the Tai Ji Men case and revealing the truth, it is also committed to defending religious freedom and calling on those in power not to infringe on people’s human rights.

A photo accompanying this announcement is available at https://www.globenewswire.com/NewsRoom/AttachmentNg/64cec01e-18f1-452a-8df6-20c28d4ccade. The photo is also available at Newscom, www.newscom.com, and via AP PhotoExpress.