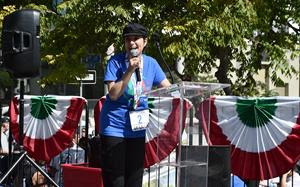 LOS ANGELES, June 06, 2022 (GLOBE NEWSWIRE) — A 5K Run and a ‘Festa di Piazza’, with ‘Italian food’, music, entertainment, to celebrate the Festa della Repubblica, Italy’s National Day. This is the event that the Consulate General of Italy in Los Angeles, after the restrictions imposed by the pandemic, has finally managed to organize, gathering on Sunday 5th June in San Pedro, home of the most important port in the United States, the Port of Los Angeles, a thousand participants for the first edition of the ‘LA Italy Run’.

“It was a dream to be able to celebrate our National Day like this,” says Silvia Chiave, creator of the initiative. “This event brought together many things: sport, sustainability, people, families, it was an event for everyone, truly a dream that has come true.” The success of the first edition is opening the way to future developments: “We didn’t expect so many people, because it was the first time. There was a great deal of participation in the project. Now we want to organize it every year and make it grow. We have learned lessons from this first edition and in the future we will have more and more people,” Chiave assures.

In addition to the runners, the event brought together hundreds of other people, families, children, not just members of the Italian American community in the area. Here, where in the 50s of the last century the first settlements of Sicilian and Ischia fishermen were born, works will soon begin for the construction of a new square, which will be the new heart of the Little Italy of San Pedro. “The purpose of this square is to create a place not only for Italian Americans, but for everyone, to bring our culture, art and entertainment of Italian Americans here,” says Joe Buscaino, city councillor of the 15th district of Los Angeles, who also took part in the Run. “The city of Los Angeles, under my leadership, has dedicated $ 5.5 million to the development of the square. The works will begin in one or two months and by the end of 2023 or the beginning of 2024 this will be the newest square of Los Angeles,” he adds.

In the square, along with the tradition exhibited during the party, with the ‘arancini’ counters, Italian desserts, pizza, ice creams, the ‘wine van’, Italian music, there was also one of the Italian technological excellence, Enel X Way, which in North America is a leader in the sector of charging stations for electric cars, which participated as the main sponsor of the event. For the record, the race was won by 23 year old Bronwyn Brunel (19.25) for women and by young Connor Spencer (15.25) for men.