This year again in attendance, after two years of limitations imposed by the pandemic

Ambassador of Italy to the United States Mariangela Zappia on Thursday, June 02, 2022 in Washington. 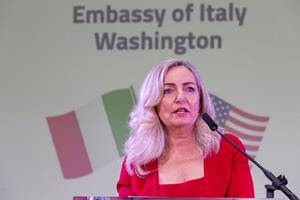 Ambassador of Italy to the United States Mariangela Zappia on Thursday, June 02, 2022 in Washington.

WASHINGTON, June 03, 2022 (GLOBE NEWSWIRE) — It is the values of the Constitution, born from the referendum held 76 years ago, which require Italy to take sides with Ukraine in the face of Russian aggression. This was recalled by the Italian ambassador to Washington, Mariangela Zappia, in the speech delivered in front of the approximately one thousand participants in the celebrations of June 2nd, at the Italian embassy. In quoting the words of the head of state, Sergio Mattarella – “The Italian Republic is firmly committed to finding ways out of the conflict that lead to the withdrawal of the occupying troops and the reconstruction of Ukraine,” – Ambassador Zappia stressed that the Italians are “alongside Ukraine and work for peace”. This commitment, “We owe it to the Ukrainians, but we also owe it to ourselves,” because “being alongside Ukraine means protecting the ideals of freedom and democracy that we have steadfastly pursued for over 70 years”. Zappia then underlined the strong, special and exemplary relationship that binds Italy and the United States, since the foundation of the Republic.

The words of Ambassador Zappia, preceded by the national anthems performed by the Italian-Brazilian singer Gaia, were followed by those of the Assistant Secretary of State for Europe, Karen Donfried, who thanked Italy for its role as a “valued” NATO ally and EU partner. The United States and Italy, Donfried said, recalling Prime Minister Mario Draghi’s recent visit to the White House and the “excellent” meeting with President Joe Biden, are “alongside Ukraine” and “defending freedom” in the face of Russian aggression. And Italy, Donfried said, responded with “great generosity and determination in this moment of crisis”.

The celebrations for June 2 this year were again in attendance, after two years of limitations imposed by the pandemic. In addition to underlining the link between Rome and Washington, the celebrations for the birth of the Italian Republic were also an opportunity to showcase the best of Made in Italy. This year the focus was on sustainability, innovation, creativity and culture. The gardens and the large hall of the embassy were a showcase ​not only for the most celebrated products of Italian agri-food industry in the USA, but also for  three iconic Lamborghinis, forming the Italian Tricolore. Guests were also able to admire an electric Fiat 500, an electric Vespa and Bianchi electric bicycles.

Made in Italy mobility was also represented by the newly launched airline ITA, as well as by Enel X columns for charging electric vehicles and by an Eni stand in which the group’s commitment to sustainability and energy transition was enhanced. Amazon Italy was also present this year, together with four Italian SMEs, whose products are available on the group’s platform in the USA.