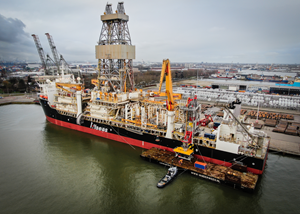 The Hidden Gem vessel, nodule collector vehicle and its launch and recovery system in the Port of Rotterdam earlier this year

Since forging a strategic alliance in 2019, Allseas and TMC’s subsidiary NORI have been working together to develop a pilot collection system to recover polymetallic nodules from the seafloor in the NORI-D Area of the Clarion Clipperton Zone (“CCZ”) of the Pacific Ocean and transport the nodules to shore for processing using TMC’s near-zero solid waste flowsheet into battery metal precursor materials and manganese silicate product expected to be used in manganese alloy production for the steel industry. The pilot collection system — that includes the production vessel Hidden Gem on the surface, a collector robot on the seafloor and a riser that lifts nodules from the seafloor to the surface — is currently undergoing wet testing by Allseas in the Atlantic Ocean and is expected to be piloted in the NORI-D Area in the Pacific Ocean later this year.

The parties expect that following the completion of the pilot tests in the Pacific Ocean, Allseas will promptly initiate the upgrade of the pilot collection system into a production-ready commercial system with a targeted production capacity of 1.3 Mtpa of wet nodules and initial use of five years prior to additional upgrades (“Project Zero System”). The parties intend to co-finance in equal parts all costs required to get into production currently estimated to be less than EUR 100 million. Once in production and subject to Allseas achieving certain production targets, NORI expects to pay Allseas a nodule collection and transshipment fee — sufficient to cover Allseas’ operating expenses, Allseas’ share of upfront and CAPEX costs and a fee linked to the value of contained metals — currently estimated at ~EUR 150 per wet tonne of nodules in the first year of production and expected to be reduced by over 20% in the following years as Allseas scales production up to 1.3 Mtpa of wet nodules. The parties intend to further detail and revise these cost estimates in the definitive agreement expected no later than 31 December 2022 following the completion of the pilot collection tests. Both parties expect to see the per-tonne cost to further decrease from these estimates if Allseas scales production capacity of its surface production vessel by adding multiple collectors on the seafloor.

Polymetallic nodules contain high grades of nickel, manganese, copper and cobalt — key metals required for building electric vehicle batteries, renewable energy technologies and steel for infrastructure. TMC’s nodule portfolio in the CCZ is estimated to be the world’s largest undeveloped single source of critical battery metals. The demand for these metals is surging and commodity prices for metals contained in nodules have all hit multi-year highs. TMC believes that upgrading the pilot nodule collection system into a production-ready collection system may allow NORI to significantly reduce capital requirements and shorten time to commercial production of the critical minerals required for the clean energy transition.

Allseas and NORI also intend to investigate acquiring a second production vessel similar to the Hidden Gem, a Samsung 10000, that is expected to be engineered to a higher production rate of 3Mtpa of wet nodules. A higher-production rate system is expected to reduce the per tonne nodule collection cost significantly compared to the first production system that TMC and Allseas intend to develop and operate.

Edward Heerema, Founder of Allseas commented: “For the last three years we have been building the pilot nodule collection system with the intent to upgrade it into a production system after the pilot trials. With the pilot system ready and undergoing wet tests, we are planning ahead for the next phase: upgrade and first small-scale commercial operations, maybe even acquiring a second vessel. While we will no doubt learn a lot in the coming months, we are pleased to have a potential economic framework for how we intend to proceed together with our partners at NORI and TMC.”

Gerard Barron, Chairman and CEO of TMC, said: “As a partner, Allseas delivers — despite pandemics and supply chain disruptions. We really appreciate their intention to finance 50% of the costs of developing and getting Project Zero System production-ready by Q4 2024 and working out potential nodule collection and transshipment fees with NORI. Even at the estimated ~EUR 150 per wet tonne of nodules, we expect to have a meaningful margin left for logistics and processing. If Allseas scales production from the initial capacity, we expect per tonne costs to go down further.”

About The Metals Company

TMC the metals company Inc. (The Metals Company) is an explorer of lower-impact battery metals from seafloor polymetallic nodules, on a dual mission: (1) supply metals for the clean energy transition with the least possible negative environmental and social impact and (2) accelerate the transition to a circular metal economy. The company through its subsidiaries holds exploration rights to three polymetallic nodule contract areas in the Clarion Clipperton Zone of the Pacific Ocean regulated by the International Seabed Authority and sponsored by the governments of Nauru, Kiribati and the Kingdom of Tonga. More information is available at www.metals.co.

Allseas is a world-leading contractor in the offshore energy market, with dynamism, rapid progress and pioneering spirit at its core. Allseas specialize in offshore pipeline installation, heavy lift and subsea construction. The company employs over 4,000 people worldwide and operates a versatile fleet of specialized heavy-lift, pipelay and support vessels, designed and developed in-house. More information about Allseas is available at www.allseas.com

Certain statements made in this press release are not historical facts but are forward-looking statements for purposes of the safe harbor provisions under The Private Securities Litigation Reform Act of 1995. Forward-looking statements generally are accompanied by words such as “believe,” “may,” “will,” “estimate,” “continue,” “anticipate,” “intend,” “expect,” “should,” “would,” “plan,” “predict,” “potential,” “seem,” “seek,” “future,” “outlook” and similar expressions that predict or indicate future events or trends or that are not statements of historical matters. These forward-looking statements involve significant risks and uncertainties that could cause the actual results to differ materially from those discussed in the forward-looking statements. Most of these factors are outside TMC’s control and are difficult to predict. Factors that may cause such differences include, but are not limited to: TMC’s ability to enter into definitive agreement(s) with Allseas with respect to the proposed strategic alliance to develop and operate a commercial collection system on terms and conditionals substantially similar to those set forth in the non-binding terms sheet; the successful completion of the pilot collection tests; TMC’s ability to obtain exploitation contracts for its areas in the CCZ; regulatory uncertainties and the impact of government regulation and political instability on TMC’s resource activities; changes to any of the laws, rules, regulations or policies to which TMC is subject; the impact of extensive and costly environmental requirements on TMC’s operations; environmental liabilities; the impact of polymetallic nodule collection on biodiversity in the CCZ and recovery rates of impacted ecosystems; TMC’s ability to develop minerals in sufficient grade or quantities to justify commercial operations; the lack of development of seafloor polymetallic nodule deposit; uncertainty in the estimates for mineral resource calculations from certain contract areas and for the grade and quality of polymetallic nodule deposits; risks associated with natural hazards; uncertainty with respect to the specialized treatment and processing of polymetallic nodules that TMC may recover; risks associated with collective, development and processing operations; fluctuations in transportation costs; testing and manufacturing of equipment; risks associated with TMC’s limited operating history; the impact of the COVID-19 pandemic; risks associated with TMC’s intellectual property; and other risks and uncertainties, including those under Item 1A “Risk Factors” in TMC’s Quarterly Report on Form 10-Q for the quarter ended September 30, 2021, filed by TMC with the Securities and Exchange Commission (“SEC”) on November 15, 2021, and in TMC’s other future filings with the SEC. TMC cautions that the foregoing list of factors is not exclusive. TMC cautions readers not to place undue reliance upon any forward-looking statements, which speak only as of the date made. TMC does not undertake or accept any obligation or undertaking to release publicly any updates or revisions to any forward-looking statements to reflect any change in its expectations or any change in events, conditions, or circumstances on which any such statement is based except as required by law.

A photo accompanying this announcement is available at https://www.globenewswire.com/NewsRoom/AttachmentNg/7d4e5fa0-9e6c-44ca-84e2-2548ebd30fa4